October 2013 Newsletter: China and the U.S. are shut down.

This newsletter will be a little different than most. Instead of one major article, I’ll provide shorter posts on a variety of different subjects:

China and the U.S. are shut down.
All businesses in China closed for their week long National Holiday on October 1. Even the shipping companies are closed, which means we can’t get anything done during this time. The National Holiday is a celebration of the founding of the People’s Republic of China on October 1, 1949. Like our July 4 holiday, fireworks displays will be seen throughout China.

The U.S. government also decided to shut down on October 1, but not for a holiday. Our government is bickering over how it will spend more of the people’s money; by October 17 they will have to agree how much more money they can borrow so they can spend more of what they don’t have.

The entire nation of China is taking a week off, while the U.S. government is laying people off because they can’t work together. In my nuttier moments, I wish someone would start a “vote them all out” campaign for the next election so we can start over with a government whose interests are not in self-preservation but in doing what’s right for the country. Getting a bunch of people in there who aren’t lifers and don’t know how to work the system for their personal motives sounds refreshing.
I know, I’m dreaming…

A fascinating article on the future of the U.S. Economy… It’s not what you think:

John Mauldin of Mauldin Economics recently published an interesting article. John is often asked when he thinks China will take over and become the Reserve Currency King of the World. As everyone knows, the U.S. has been shooting up on the borrowing and printing juice for a long time; surely, goes the conventional wisdom, that’s going to one day collapse the dollar and open the door for the Yuan to take its place.

Mauldin argues that the U.S. dollar will continue to be the currency of choice for two reasons:
1. The coming energy boom in shale oil and gas. I’ve read other articles that say the U.S. economy should be hopping by 2015 because of our recent discovery of shale oil and gas, so this isn’t the first time I’ve heard this. If this is true, it’s possible the economy might take off.

2. Productivity gains in U.S. manufacturing. Mauldin writes that the oil boom, combined with new technologies, are going to further propel the U.S. economy. He also mentions that these productivity gains mean that businesses can do more with less people. Other sources I’ve read recently have said mentioned that middle class jobs are going to be on the decline, and that for people to survive they will have to “hire themselves”—meaning start their own business.

With our current government’s habit of liking to pay people not to work and penalizing those who do, it’s hard to see how this will play out. A productivity boom could mean employment problems and a thinner middle class, or, if people adjust to the rapidly changing economy, it could mean an explosion of small businesses and waves of new employment. If our government would just get out of the way and quit messing with everything, we’d probably be alright. But they like to tax and spend and borrow so they can spend more, and paint everyone who doesn’t agree with them as “extremists,” so all bets are off.
You can read all of Mauldin’s article here

When I emailed a U.S. company and asked for a quote on a laser cut aluminum sign for a trade show…

…He fired an email back saying he wanted no part of anything that had to do with “Communist China.” I was tempted to email him back and mention that China has one of the largest churches in the world with an estimated 50-100 million believers, that their whole system has rapidly evolved to something that looks far more capitalist than communist because of our involvement, and that the U.S. is the largest porn producer in the world while China outlaws it… but I held back. I could have mentioned that China is the U.S. government’s banker. I wanted to ask him if he had any Apple products (which are Chinese made) or computers; Dell, HP, and most of the rest are made in China. I’m as pro-American as the rest, I just want to see integrity when I hear such things.

The Cube
No, I’m not talking about the Borg Cube from Star Trek.
We had some 3” cubes made from solid walnut with a world map image on the top made up. I’ve always loved good wood work, and these look great. 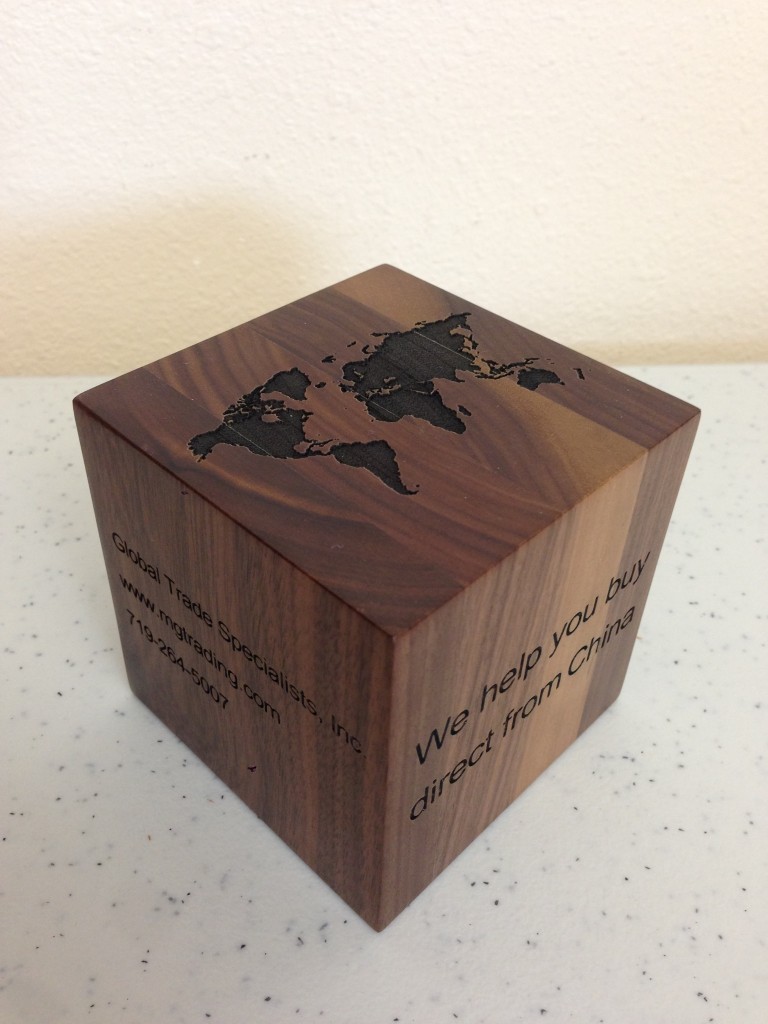 If you want one and live in the U.S., please email me with your address and we’ll send one out.

New Facebook Page
We now have a Facebook page for Global Trade Specialists up. At the Facebook page we’ll be making weekly posts with updates, news, points of interest, videos, and more. We already have one video up along with a cool picture of Queen Victoria Harbor in Hong Kong.
Be sure to like our Facebook page so you can receive our updates. Here’s the link:
https://www.facebook.com/GlobalTradeSpecialistsInc

Previous Newsletters:
September: When Life Interrupts Business
August: Video: Who We Are
July: What You Need to Know about the ISF Penalty
June: Tiananmen Square and Freedom
May: Our Most Critical Asset
April: Contrasts Between East and West
March: The Titanic; Made in China
February 2013: They’re Back… Sort Of
January 2013: Business News and Trends for 2013

All material copyright 2013 Global Trade Specialists, Inc.
This newsletter may be reprinted as long as the copyrights and a link to the Global Trade home page (www.mgtrading.com) are shown at the end of the article.