The Mess at the West Coast Ports 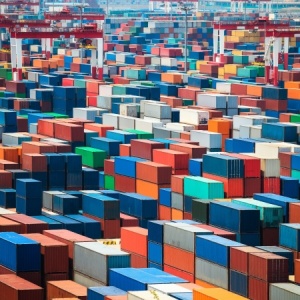 For the past seven months, the International Longshore and Warehouse Union, which represents 20,000 dockworkers at the ports along the West Coast of the U.S., including Los Angeles, Long Beach, San Diego, San Francisco, Oakland, Portland, and Seattle, have been in a tiff over a contract dispute with the Pacific Maritime Association, which represents the shipping lines and terminal operators.

The two sides have been at a standoff for seven months, which, as we all know from the way union spats usually go, means the rest of us are going to get sprayed with the refuse from their dysfunction.

Every port on the West Coast now resembles the parking lot at the Super Bowl. Ships that are laden with cargo are sitting idle in the water as they wait for those ahead of them to be unloaded. What started in the ports of Los Angeles and Long Beach has now become a contagion, spreading  to every port on the West Coast, as importers who normally bring their shipments through LA had their shipments rerouted in hopes of getting their orders in a reasonable amount of time.

Today, “reasonable” and the West Coast ports don’t match. West Coast Importers who used to receive their orders one week after the ship hit the dock now have to wait three weeks and longer. One customs broker recently told me it’s going to get worse before it gets better. There will be a surge of shipments coming in from Asia to beat the Chinese New Year in the next month, further adding to the backup.

This not only affects companies along the Western Seaboard of the U.S., but those inland. Customers in states like Colorado, Arizona, Utah, and other Western region states have their shipments routed through the West Coast, which means they get to endure the experience of having the Union-PMA mess screw up their businesses too.

West Coast Longshoreman are reportedly making $147,000.00 a year, with an additional $50,000.00 in annual benefits, courtesy of their status in the Union.  While they have a dangerous job (it wouldn’t be your best day if a 40,000 pound 20 foot container fell on you), the average Joe on the streets is going to have a hard time understanding why 20,000 dockworkers with a six figure income and a benefits package worth more than the average American makes are train wrecking the U.S. economy by inflicting hundreds of millions of dollars in damage.

The three to four weeks companies are losing while they wait for their shipments can threaten their livelihood. Those who can’t receive their shipments in time are losing large orders, laying off employees, and are even in danger of closing.

The ILWU and the PMA, of course, are blaming each other. The ILWU charges the PMA is not ordering enough labor, while the PMA blames the dockworkers for hitting the brakes on productivity.

Meanwhile, the rest of us take the hit. It would have been nice if, months ago, someone at the federal level stepped in and put serious pressure on both sides to work it out and move on, but the U.S. government is seemingly checked out on this issue. I guess our country looking like a dysfunctional mess to the rest of the world while the dockworkers mess drains billions of dollars from the economy doesn’t show up on their radar.